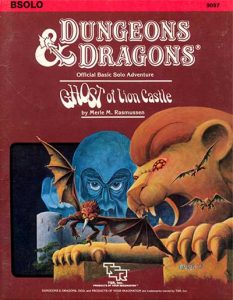 If you have even a passing familiarity with the world of both arcane and divine magics, then I daresay you are also a fan of role playing games. And of the wide variety of RPGs in existence, Dungeons and Dragons is undoubtedly a king among barons.

BSOLO – Ghost of Lion Castle was one of only a few solo adventures published by TSR for Dungeons and Dragons in the mid-1980s.

Its companion, XSOLO – Lathan’s Gold (for Expert Rules characters level 4-6), was published not long after. Both modules were written by Merle M. Rasmussen.

Ghost of Lion Castle is a full-fledged D&D module with color maps and great art by Bob Maurus. Though you can create any type of character to use with the module, it’s meant for elves and magic users. As such, it provides you a choice between a pre-generated elf or a wizard to use in your adventure. 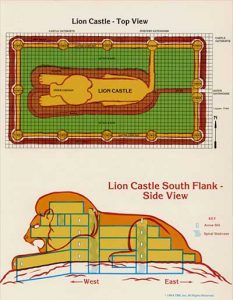 Though the gamebook uses passages to mark choices, it also uses a detailed map system to navigate through the castle — a map system which is left purposefully incomplete, forcing the reader to fill in the blanks.

This solo adventure also uses a feature called the “Magic Journal” — essentially a blank outer margin where the reader can fill in notes. It also contains some useful notes already filled in reminding the character to make changes to their character sheet or giving some obscure but important points on the rules in play. 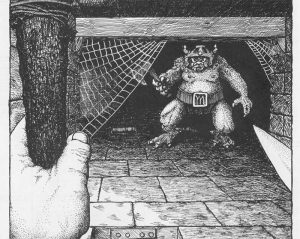 I wish that TSR had created more solo modules like Ghost of Lion Castle. Aside from the BSOLO and XSOLO modules, they did publish a few other solo-oriented adventures.

Blizzard Pass by Zeb Cook and Maze of the Riddling Minotaur by Jeff Grub come to mind, as does the Advanced D&D adventure Midnight on Dagger Alley by Merle Rasmussen. Many of these featured either invisible ink or “magic viewer” gimmicks, however.

While both invisible ink and a (red plasticene) magic viewer both sound like interesting and novel ways to keep players from “cheating” in a solo adventure and enhance the sense of discovery, they don’t seem to have helped in preserving the physical longevity of the individual books.

I also suspect the difficulty and transferring those modules to PDF will make seeing them reissued for digital sale unlikely. Too bad, considering Zeb Cook and Jeff Grub are both RPG legends.